“The rapid adoption of LEDs in lighting marks one of the fastest technology shifts in human history,” Goldman Sachs stated in a new report.

The accelerated deployment of light-emitting diode (LED) bulbs is on track to save U.S. consumers and businesses $20 billion a year in electricity costs within a decade, which would lower U.S. CO2 emissions by some 100 million metric tons a year! The growing global effort to speed up LED adoption could ultimately cut global energy costs and carbon pollution 5 times as much.

Let’s look at some key charts and facts that illustrate the LED lighting “miracle,” which is every bit as remarkable — and every bit as unheralded by the major media — as the solar miracle, the battery miracle, and the electric vehicle miracle.

As recently as 2009, this country didn’t have even 400,000 installations of common home LED bulbs, according to the November 2015 Department of Energy report “Revolution… Now The Future Arrives for Five Clean Energy Technologies.” And yet by 2012, we had 14 million — and by 2014 we had whopping 78 million installations.

This revolution has been driven by “sharp cost reductions and performance improvements, relatively short replacement cycles for incumbent technologies, and aggressive policy support (including bans on incandescent technology in major markets such as the U.S., the E.U. and China),” as Goldman Sachs has detailed in its recent reports on “The Low Carbon Economy.”

Since 2008 alone, prices for LED lightbulbs have dropped a remarkable 90 percent, and you can now buy a 60-watt-equivalent LED bulb for a little more than $3.

Goldman forecasts “that LEDs will account for 69 percent of light bulbs sold and over 60 percent of the installed global base by 2020.” This chart of where LEDs have been and where Goldman Sachs projects they are going in the near term is from their July 20 report, “The Low Carbon Economy: Our Thesis In 60 CHARTS.” It compares LED adoption with the adoption of hybrid and electric vehicles and solar PV and wind. 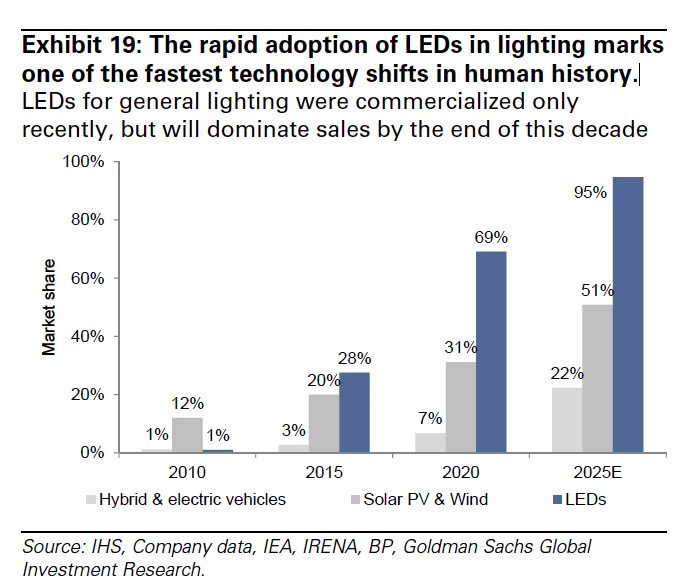 At the same time, LEDs can last for up to 5 years of nonstop use — or a few decades if used just a few hours a day. This is 50 times longer than incandescents and some 3 to 7 times longer than fluorescents. At the same time, LED bulbs provide superior light quality than compact fluorescent lights (CFLs). For all these reasons and more, GE announced earlier this year it would stop making CFLs “for the U.S. market and instead focus its consumer lighting efforts on LED lamps.”

With the initial price dropping sharply while the ultra-low lifecycle costs also keep dropping, you end up with a revolution — one that is happening even faster in the United States: 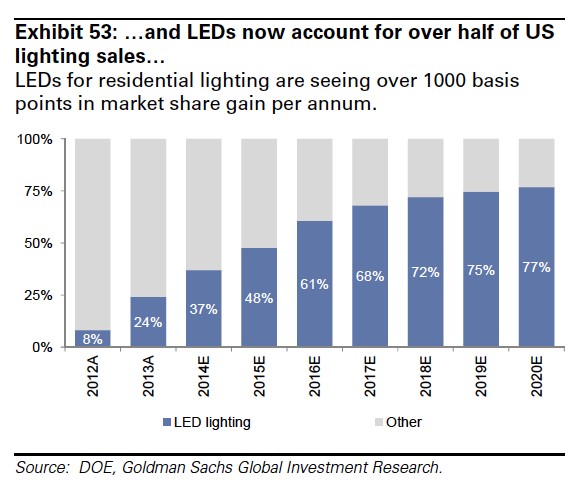 With such an unprecedented technology revolution, it’s no wonder that, in 2014, the Nobel Committee awarded the Physics Prize to three scientists for their 1990s invention of “efficient blue light-emitting diodes [LEDs], which has enabled a bright, energy-saving white light source.”

And in case you think that one small product you can hold in the palm of your hand can’t be a game-changer in the arena of energy and climate solutions, think again. The nation’s total electricity bill for residential and commercial customers is now more than $320 billion. Of that about 15 percent is lighting — nearly $50 billion a year.

Goldman Sachs projected last month that LED lights “are on track to cut power consumption for lighting… by over 40 percent.” That would provide annual savings of more than $20 billion for consumers and businesses within a decade. And that in turn would reduce U.S. CO2 emissions by some 100 million metric tons a year.

141 SHARES
Close
Do you want to read more similar stories?